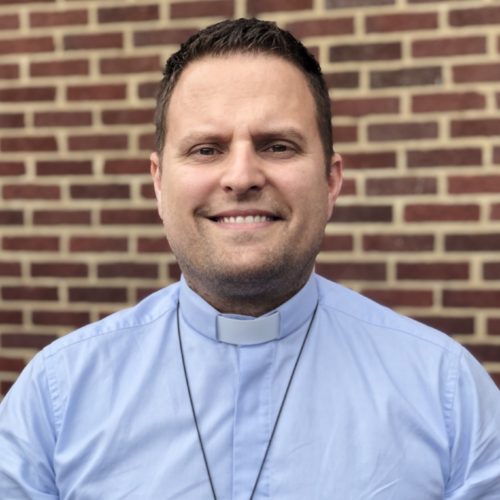 At age 24, Fr. Jason Leonard packed everything he owned in a pickup truck and moved cross-country from his known world of Seattle, Washington to work alongside a director of college ministry in Chattanooga, TN.

“My friends said, where’s Chattanooga? And I said, I don’t know – people told me it’s near Atlanta. And I had already committed to moving there. That’s crazy!” says Fr. Jason. “That’s the kind of thing you do in your young 20s.”

He had convinced the director to give him a very short-term position after hearing him speak at a seminar in Washington state – a job Fr. Jason promised he’d leave after just 10 months.

“What I found here is a ministry that is wild, and beautiful, and messy, and it’s wonderful,” he says.

Fourteen years later, Fr. Jason is still there – now Director of The House, a thriving college ministry on the University of Tennessee’s Chattanooga campus, ministering to roughly 600 students a week during the school year through corporate worship, small group studies, and extensive pastoral care. Fr. Jason remains passionate about this work because of his own story: His faith in Christ came through the mentorship and care of a college minister and older men in the Church while at the University of Washington.

“They didn’t seem to be afraid. They held their ground – not in terms of making really good arguments, but giving me space,” he says. “And I was literally studying different world religions. So I had this experience of discovering a group of people who loved Jesus and weren’t afraid of me.”

Fr. Jason became ordained in the ACNA last year through his connection with The Mission Chattanooga, and its long-running support of The House through mentorship of students and partnering in service projects.

“That was largely my introduction into Anglicanism – because The Mission was doing great work through The House on the college campus… which softened my heart a ton toward them, and I started asking a lot of questions about Anglicanism,” says Fr. Jason.

And Fr. Jason is extremely passionate about churches taking a broader, missional view of college ministry and treating it as one would foreign missions on foreign ground.

“They have their own police system, their own judicial system, their own monetary system. The craze right now is how to make sure that a college student doesn’t have any needs that aren’t addressed on the college campus,” he says. “So right next door to a public university you might have a thriving church that says, ‘How come nobody’s coming to our service?’ All their needs are trying to be met by the public universities.”

So Fr. Jason and his staff at The House began asking the question: What does the Church offer students that cannot be met by a university, and how should the Church share this?

“We get to extend grace in a real meaningful way. We get to forgive, rather than make people just earn their way back into something,” he says. “We get to let people fail and then it’s not the end of them, because our identity is rooted in Jesus.”

And then instead of expecting college students – who are in an incredibly transient period of their lives – to put down roots in churches to discover these unique things, he says the Church should seek the places they are already gathering.

“We are at a moment in history when 50% of our 18- to 23-year-olds are in and around universities. It’s literally the last time that we know where they’re all going to be gathered, and that they’re open to receiving these things and trying new things,” he says. “We ought to be evangelizing and making disciples of Jesus like crazy, and what that looks like mostly is pastoral care and loving them, getting to know them, caring for them, being present with them. Not telling them to leave their environment and come be with us — let’s go be with them.”

The House strongly encourages students to take part in its small groups – called ‘Core Groups’ – which are two hours a week in the homes of local church members. Over 400 students there become connected with parishioners around the city this way.

“Students go to churches all the time and don’t know anybody. They go for two or three years and don’t ever get connected,” he says. “Imagine if college students are meeting in your home for two hours a week for a couple of years. And when they’re interested in going to a church in town, you tell them you’d love for them to come with you.”

He continues, “In the postmodern West, everybody is convinced that we’re supposed to do this thing alone. We can hide behind masks and filters of all sorts of kinds. I want people to have walked together for two, three, four years and see life’s transitions.”

Fr. Jason says when a church invests in foreign missions, there’s an understanding that those efforts are about the broader kingdom of God – and investing in college students is no different.

“This isn’t ultimately about just our local church. This is about God’s work being proclaimed and shared from one generation to the next,” he says. “This is about the invisible church maybe even more than this visible local church that we’re investing our resources in.”

As churches find themselves both sending graduating seniors to college and preparing for new college students in their midst, Fr. Jason offers some practical steps on how to serve them well.

Be missional and open-handed.
“Don’t spin your wheels trying to create and generate program – there’s probably enormous amount of program already on the college campus,” he says. “Trust that if we continue to move toward them, and present to them opportunities for more meaningful connection and involvement with the local church, they will take them. And often they are so grateful.”

Fr. Jason cites his formative experience as a 19-year-old, when a local church offered him the opportunity to serve on an elder and deacon nominating committee.

“So I’m sitting in this room, interviewing somebody three times my age, and I’m asking him what it means for him to follow Jesus. And my life is changing before my eyes, and it’s because this church gave me the opportunity to step up to the plate when I had no business being there. It was such an interesting commitment that this church had to value the next generation. And it was so missional.”

“You don’t let staff or parents talk – you just let the high school students ask them questions and go back and forth.”

Prepare parents to accept changes in their student.
“When your kid comes home – because I’m on the other end of this, and I see it – they are not the same person that they left as. They go home and they feel completely unknown by their families of origin and by the churches of their youth. Pray for college students who are away, send them care packages, and when they come home ask them lots of questions, and help them to know that you’re okay to receive ways that they’ve changed. Stay curious and [don’t] be afraid.”

Encourage strategic risks.
Instead of asking students to immediately commit to institutions – which can be driven by our own anxiety and fears – encourage them in the opportunities they have before them, listen to them, and help them find out what they desire… which amounts to conversations and pastoral care.

“Encouraging them to be risk-oriented a little bit in their young 20s is really great – it’s a time in their life when they can do crazy adventures. They can work for peanuts.”

Fr. Jason references his own ‘crazy adventure’ of initiating a ministry internship and moving to Chattanooga at age 24 – taking a job for just $24,000 a year.

“And I knew that that was ridiculous, but I said, I don’t need more than that right now. And I’m never going to be able to do this again,” he says. “Strategic risks are important.”

Talk with Fr. Jason!
“Less than five percent of college students are involved in college ministries, and we know that not very many of them are connected to local churches. That’s across the nation. There’s just so much opportunity right now… I would love to help churches get more excited and be less frustrated. I’ll make time to talk to anybody who’s interested in what it looks like to help raise up the next generation and care for them. I would love to do that.”

Email Fr. Jason Leonard.
Visit The House website.
Check out this video to learn more about the ministry of The House.