What is a Standing Committee and What Do They Do?

When we gather for the Mission Matters Conference & Synod during the first weekend in November, the diocesan Standing Committee will have its last meeting before some members rotate off, and new members are voted on by local parish delegates. But just what is the Standing Committee, and what does it do?

Whether you call it a parish council, a vestry, or another name, there is a team of people at each local church looking after its business and temporal affairs: The Standing Committee operates for the diocese in the same way.

“First and foremost, we’re brothers and sisters in Christ. And it’s easy to get caught up in the, ‘Oh we’re all about the business parts of how the church is run.’ And I would be just supremely remiss if I did not say that we ground everything we do in prayer.”

Ridgell says the Committee seeks God’s guidance at the beginning of every meeting, and some meetings will include prayer spontaneously.

“There are times that we discuss areas that we feel we are so much needing God’s guidance in that moment – someone will just stop and say, ‘Can we just stop for a moment and pray?’ And we do. We just stop everything and pray.”

Each Standing Committee member has a prayer partner on the committee, which means they’ll occasionally call or text each other with specific prayer requests.

“Even the archbishop has a prayer partner on the committee,” says Ridgell. “So we are a praying group, we are a group who does work together intensely, and we have fun. We do tease. There’s always a lot of laughter. And chocolate!”

Typical meetings involve hearing reports from Canons and different subcommittees, and the progress of their work.

“Nobody’s ever out on a limb by themselves. We all work on this together, we take counsel with one another, we’re very collegiate, we’re a team,” says Ridgell.

She says one of the overarching objectives is to consider – with every decision – how to best help and support the local parishes.

“We’re looking ahead as well. We set the strategy for what is important with the diocese. How can we better support the parishes?” says Ridgell. “How can we lead and be there for them when they need us, and how can we get out of the way when they need us to?”

One way the diocese and Standing Committee has been serving local parishes is by providing operating guidelines and policies with a diocesan stamp of approval. 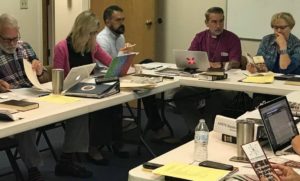 “We’ve published some financial guidelines for local parishes, and that way the local parish doesn’t have to figure it all out for themselves. We’ve got personnel policies the same way. We’ve got a couple other things in the works right now because we’re a young diocese. And we’ve seen as part of our mission in these early days to put some processes in place that will strengthen our diocese and that will help us be sustainable,” says Ridgell.

And while procedures and policies don’t sound incredibly exciting, the collaboration across the diocese to develop them – from subcommittee members in many different parishes – is.

“It’s what that represents. [It] represents the diocese reaching out and saying, here’s a resource. This has been tested and tried. We want you to have this,” says Ridgell. “The content of those policies is really pretty rich, it’s pretty substantial, because it’s been developed by people who’ve lived it. So even with something as mundane as a dusty old set of financial procedures – that can represent something that’s really positive and relational.”

The Standing Committee consists of 12 members – six clergy, six lay. At Synod this year, Ridgell will rotate off the Committee, and Vice-Chair Fr. Bill Midgett will become Chair. Synod delegates will vote on new members – two clergy, two lay – who will serve three-year terms, replacing the four members rotating off.

“You’ve got some really good continuity with those eight people who were there last time,” says Ridgell.

And the Standing Committee is the only committee in the diocese that meets in person for every meeting.

“We need that face to face time,” says Ridgell. “And the archbishop is very, very strongly supportive of this.”

So who is a good fit for the Standing Committee? Ridgell says anyone with a desire to serve the diocese, and the ability to meet in person at Holy Cross in Loganville – where nearly every meeting is held – about seven times a year.

“We need more women on the committee. We do,” says Ridgell, who in her first two years on the Committee had at least one other woman serving as well. “When I write them, I write ‘dear brothers in Christ,’ and it pains me, because I would love to be writing ‘dear brothers and sisters in Christ.’”

The Nominating Committee encourages nominations from around the diocese – with the nominee’s knowledge and permission, of course – and the Standing Committee will approve a finalized slate at its October meeting.

Notes from the Standing Committee Chair

“As we disciple ourselves and others to tithe, remember that 10-10-10 is our Biblical model. We tithe as church members, our church tithes to the Diocese, and the Diocese tithes to ACNA,” says Ridgell. “The budget for every year that I’ve been on the Standing Committee has always included ten percent to ACNA, and we encourage all to prayerfully engage with the Biblical tithing model.”

The diocese can help any church develop a plan to reach ten percent giving.

Find ways to begin knowing your brothers and sisters throughout the Diocese.

“Churches are feeling more connected,” Ridgell says. “One of the best things over the last few years that we’re starting to see more and more, is that people from different churches are getting to know each other a little better.”

“If there are others in your church who talk with fellow Diocese members, ask them about it, and maybe worship at another ADOTS church once or twice a year,” she says.

And Ridgell notes that an excellent way to connect is attending Mission Matters Conference & Synod 2018, November 2-3, at Holy Cross Cathedral in Loganville, where lay members and clergy will gather to worship, pray, reconnect, and learn together: “You’ll enjoy meeting others throughout the Diocese and making new friends,” Ridgell says.

← Liturgy in a New Generation: Winfield Bevins on Mission
The Ministry of Vergers →