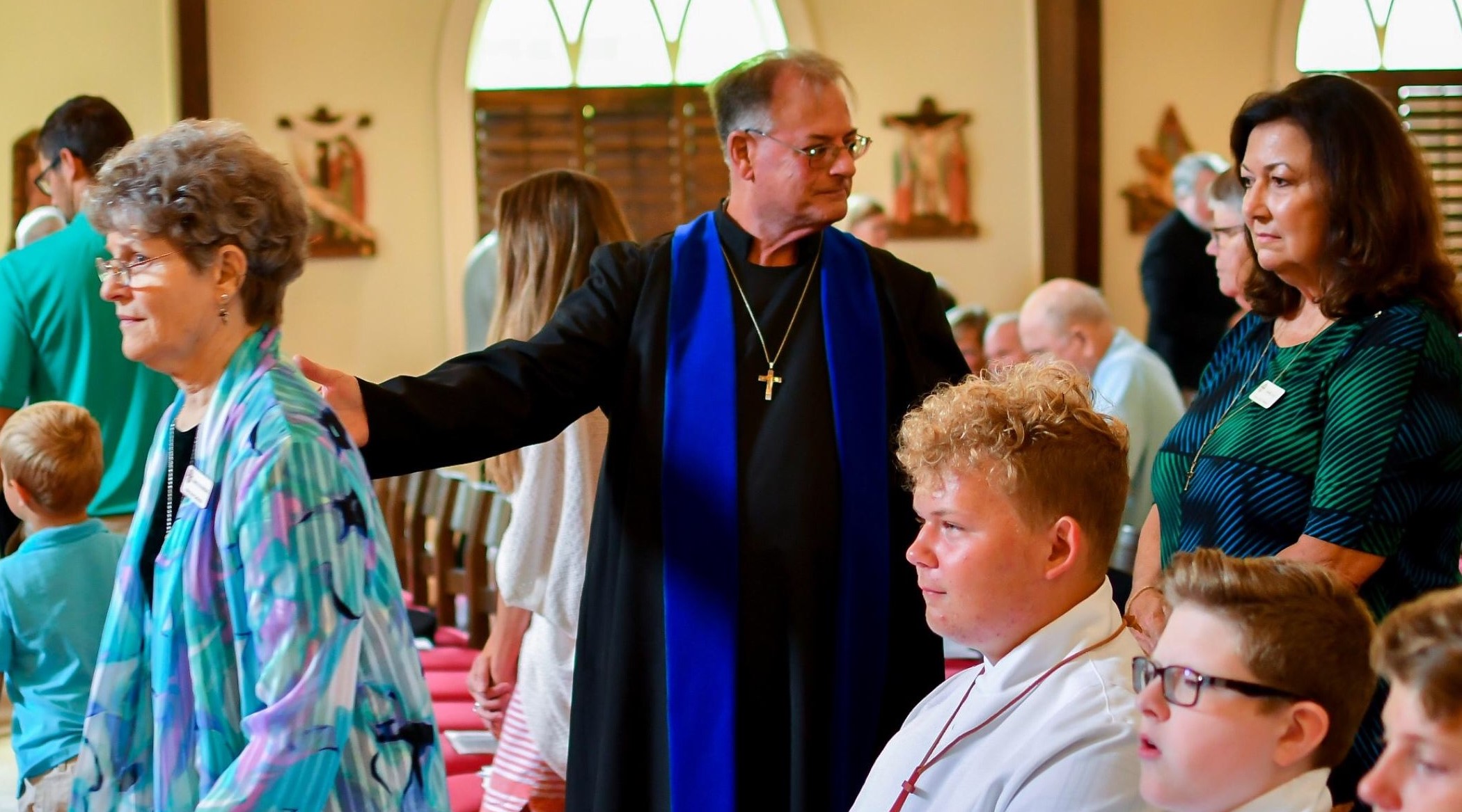 The Ministry of Vergers

On a given Sunday at Holy Cross Cathedral, you may find Brandon Wycoff organizing bulletins, setting out water bottles for guest clergy, gathering worship ministers for prayer before the procession, or even heading to a closet for a mop bucket.

Wycoff has been the Verger at Holy Cross for nearly two years, a “very large and encompassing position” that coordinates all the Sunday morning worship support ministries to ensure a smooth and inviting worship experience.

“It’s almost like clockworks… Altar guild, flower guild, acolytes, lay eucharist ministers, all these people who serve those various aspects of getting things prepared in the church for an experience,” says Wycoff. “And the verger kind of coordinates or interacts with all of these guilds to ensure that everything they’re doing is being accommodated.”

Wycoff’s routine is to arrive early on Sundays at Holy Cross, before anyone else, and set the first table for Communion.

“I try to prepare the church for everyone who’s coming in to begin,” he says.

His morning tasks continue with making sure all readings are prepared and correct, ensuring there are enough Eucharist elements, checking with clergy to see if there are special considerations for the service, making sure acolytes have their assignments, ensuring there are enough lay Eucharist ministers and that they’re prepared for their presentation at the table… the list of duties seems to go on and on.

“I thought to myself one evening, Jesus is the Good Shepherd. I, as the verger, am the cat herder!” he jokes.

If you’ve never heard of a verger before, you’re not alone. Much of their ministry is behind the scenes, occurring before congregants arrive to worship. However, Wycoff says what vergers do during and between services is very visible.

“I want to intermingle before as I have time, between services talking with the members of my church, seeing how they’re doing, how their family’s doing… Do they have a question about anything that happened during the service?” he says. “I want to make sure for visitors and members that they feel like when they walk out of the door, that they had people – myself included – who made them feel like they were part of our family.”

Wycoff also proactively assesses any needs parishioners and clergy may have during the service, to “try to prevent the problems before they happen.”

“If I’m doing my job and providing what I feel like the verger is to do, then I’m the go-to guy for everybody there,” he says. “And one of the most important aspects that has made the worship at our church as successful as it has been – and made my job much more successful – is a strong involved worship administrator. That’s why we’re there: to ensure that the people who are worshiping with us at Holy Cross – or at any church – have the best worship experience that they can have, so that the Lord has that opportunity to open their heart and let the Holy Spirit work in their lives.”

The ministry of vergers has a rich history across many Christian denominations. The short staff they process with – called a ‘virge’ – was originally a defensive weapon a verger carried to protect a traveling priest from robbers or wild animals.

“At one point in our history, we were even responsible for digging the graves,” says Wycoff.

He says the role of verger is more known in Europe, Southeast Asia, and Canada, but “it can be a very vital role in the Anglican church today. I think it needs to be a very important role.”

“Look back at the videos of the recent [British] royal wedding, and you will see a boatload of vergers working with the clergy in that ceremony,” says Wycoff. “Bishop Frank texted me. He said, ‘Did you see all the vergers?!’”

Wycoff says many churches in ADOTS are probably already filling the roles of the verger, but it may be several people who have no title or are in a different ministry. He says educating churches on vergers can allow someone to answer the call to serve the Church in this way.

“It’s someone who is recognized amongst the local church that they are the person who has accepted the responsibility to ensure that God’s house is well cared for,” he says, “and that those people who are serving, both collar and congregant, are supported in the ways they need to be supported in order to make that worship experience the best it can be for everyone involved.”

In fact, the role and need for vergers is gaining traction in the ACNA. Last fall, Wycoff attended the first ACNA Guild of Vergers conference, hosted by St. Peter’s Anglican in Tallahassee, FL, which has a large verger ministry and manages Guild operations. This year’s conference is coming up September 28-30 at St. Timothy’s Anglican outside Houston, TX.

“It is becoming stronger, and that was part of the reason for the formation of the Guild, was to encourage, inform, and offer assistance and training for those churches who felt they had a need and a desire to start the program,” says Wycoff.

Brandon Wycoff will be presenting a workshop on Verger Ministry at the ADOTS Mission Matters Conference & Synod 2018, November 2-3. Register here for the conference, contact Wycoff through ADOTS, or visit the ACNA Guild of Vergers website for more information on verger ministry in your parish.

← What is a Standing Committee and What Do They Do?
Celebrating 25 Years of Work Across the World: Anglican Frontier Missions →