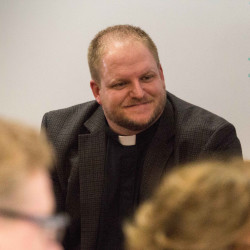 Canon Dan Alger concedes that this is often how he’s known around the diocese and the province – and he seems okay with that. As the Canon for Church Planting, he recognizes that the topic is often polarizing, with people skewing either enthusiastic or antagonistic. But what he’s not okay with: an apathetic view of church planting.

In his message, Canon Dan outlines how the entirety of Scripture points us to participating with Him in creating, and walks us through the stories in which God is continually calling us to “go, be fruitful, and multiply.” When sin enters the world, he points out, what we see instead from humanity is a broken response to that call. “They still go, but what comes out of their going is ungodly.”

When Jesus tells his disciples, ‘As the Father has sent me, even so I am sending you,’ Canon Dan insists that it’s the same message that it’s always been. “‘Go. Be fruitful. Multiply. Fill the earth and subdue it’… It’s the same plan.”

So then, how did the disciples go about doing this work?

“They planted churches!” says Canon Dan. “What we see in Acts is constantly churches being planted, then the rest of the New Testament are letters to churches that were planted, or to their leaders.”

He continues, “When we’re talking about mission and church planting, the Church has always been God’s idea. It’s not separate from mission… The Church being the faithful people of God is the Church on mission.”

As we begin a new year, Canon Dan implores the diocese that – starting now – church planting needs to become normative and not a rarity.

“We have to have a culture of church planting. The ACNA and ADOTS – we’re new. We’re still very, very new. And we have this small window of time to create a DNA that will shape our institution and our organization and our North American expression of Anglicanism for generations to come. That’s the moment that we’re in right now.”

And to create that culture, Canon Dan says we must hold to the conviction that church planting stems from all of Scripture – or else it simply won’t happen.

“Church planting is hard, it is risky, and it’s scary, and it costs money, and it doesn’t always work,” he says. “It’s inherently risky because it’s on the edges of mission. If we don’t have a conviction for this, we’ll never do it… We have to hold this conviction that says whether we like it or not, we’re doing it because God has called us to. And that we would be unfaithful if we don’t.”

Listen to Canon Dan’s entire message here… including common misconceptions about church planting, statistics on church plants and the unchurched, and how church plants influence established churches. Turn up the volume!