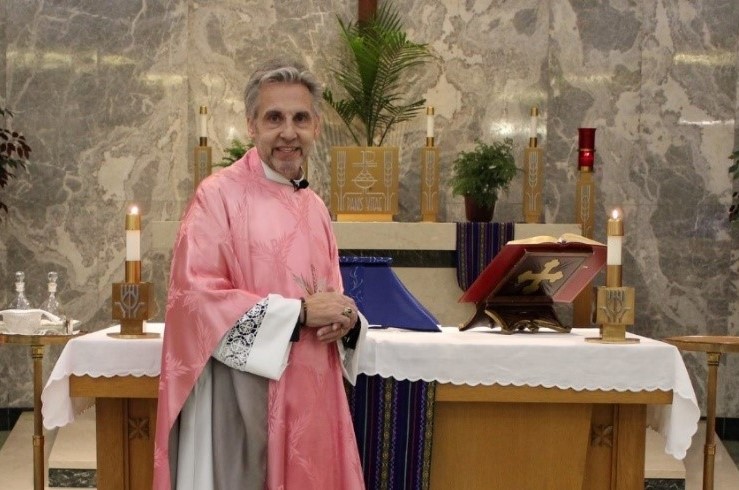 We have several clergy retiring from ministry in ADOTS this year: Rev. Bill Sharp, Rev. Robert Hart, Rev. Ray Kasch, and Rev. Mark Goldman. Today we would like to feature Rev. Mark and his ministry serving All Saints Anglican Church in Huntington, WV, and sincerely thank him for his shepherding and leadership.

“I guess you can say my greatest joy was serving God’s people.”

Fr. Mark’s path to ministry began in 2004 after his profession of vows as a third order Benedictine, under the direction of Fr. Andrew Counts. But he felt a strong call to continue on and pursue the Diaconate, and it was under Fr. Andrew’s guidance that he became ordained in 2005.

His profession of vows, the strong leading to pursue the Diaconate, and God’s plan culminated in the founding of All Saints Anglican Church in Huntington, WV, as “a small group of Anglicans from the Tri-State area of Kentucky, West Virginia, and Ohio” – meeting for the first time on Sunday, October 1, 2006.

Beginning on Christmas Eve of 2008, they began worshiping at the Convent Chapel of St. Mary’s Hospital – “thanks to a collaborative effort with the Pallottine Sisters” – which would be the congregation’s home until 2020.

“Fr. Andrew Counts became the first rector and invited me to become his deacon,” says Fr. Mark. “In 2007, I was ordained an Anglican Presbyter.”

During his time at All Saints, his ministry progressively evolved from deacon to Assistant Rector. “Then in 2013, during a rector search, Archbishop Foley Beach contacted me and asked if I would be interested in the rector position.” He has served in that capacity for the past seven years.

“As a priest, I have experienced numerous joys. I enjoyed our liturgical, sacramental, and evangelical service structure along with blending of music. I have witnessed the move of the Holy Spirit many times with miracle healings. Baptisms were a favorite since it brought people into the kingdom,” he says.

“There were house blessings, welcoming visitors, hearing confessions, our yearly outreach to Marshall University incoming freshman, mid-week and monthly fellowship gatherings, and as a licensed professional counselor listening individually to the hearts of the saints. I especially enjoyed my role as a mentor supporting others in church ministry and those pursuing priesthood.”

One Sunday will always be an especially fond memory for him. That Sunday – which was also his birthday – he baptized his one-year-old granddaughter, “an association she will carry for life, and the picture of that moment is proudly displayed in our home.”

He has also had the honor of caring for families at the end of life. When a parishioner’s mother was hours from death, the family called him to lead the Ministration at the Time of Death. After conducting the Eucharist and using intinction, he offered for the parishioner to place the wafer on his mother’s tongue.

“Not only was this a moving moment for the family, but the parishioner was appreciative for this final interaction with his mother,” he says.

Fr. Mark was grateful for the support of his congregation and the Diocese of the South when his adopted daughter unexpectedly died at the age of 26.

“I cannot express enough my gratitude for the support I received from ADOTS, and especially to Fr. David Brannen, rector of St. Andrews Anglican Church, for his assistance in helping to develop and lead the funeral service,” he says. As a priest, “it was an honor to conduct the grave side services for both my father and daughter.”

Now after 14 years of ministry, he’s taking time to concentrate on spiritual renewal while in retirement.

“I refer to this season in my life as my ‘Inner Retreat Pilgrimage’ by praying the daily offices, focusing on the Psalms, reading spiritual classics on the saints, as well as incorporating centering and contemplative prayer,” he says. “It sounds like a lot, but easily done spaced throughout the day.”

Retirement has also reawakened his calling as a priest.

“On the day we officially disbanded All Saints and moved out of the Convent Chapel, I noticed the despair in the faces of our remaining congregants and sensed their anxiety of not being able to receive the Eucharist,” says Fr. Mark. “At that moment, I literally saw them as ‘sheep without a shepherd’ and knew instantly what God was calling me to do.”

So he now meets with them periodically throughout the month, continuing their Anglican worship in homes, “like the early church.”

“As a good friend of mine once said, ‘I am not retired, I am re-fired for the Lord,'” he says.

He offers up this quote from C.S. Lewis to express his association with ADOTS and “my sincere gratitude for the privilege to serve as a Presbyter”:

“It is when I turn to Christ, when I give myself up to His Personality, that I first begin to have a real personality of my own.”