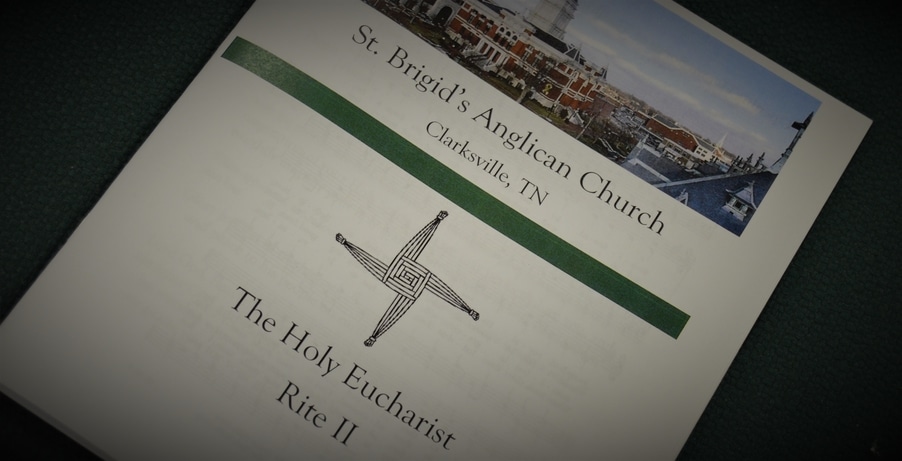 St. Brigid’s in Clarksville, TN just held its first Eucharistic service this past January, as a church plant out of St. Patrick’s in Murfreesboro, TN.

The lay leaders for St. Brigid’s, Wesley and Shari Brown, have had a long journey to Anglicanism – beginning for Wesley while he worked at a Baptist bookstore as a teenager.

“It was there that I was introduced to the writings of C.S. Lewis and J.I. Packer and through them, higher theology of the Sacraments,” says Wesley. “That early in my journey Anglicanism was simply a curiosity, not a longing.”

Wesley spent the next dozen or more years in research of Anglicanism while serving as a Baptist deacon. Sermon podcasts, Anglican 101 classes found online, and Anglican authors all fueled his eventual desire to see Anglicanism in Clarksville. Shari also missed a strong sense of community she saw being fostered in the Anglican church.

One weekend in Spring of 2016 was the turning point. While on a weekend sabbatical of sorts, Wesley attended his first full Anglican Holy Communion service. He also felt influenced that weekend by the mention of a number of Anglican ministers in a book he was reading, while also receiving an email from Canon Dan Alger in response to a request about a possible ACNA plant in Clarksville.

“So that weekend three things happened rapidly and somewhat out of the blue, and all three things pointed directly to Anglicanism. I’m pretty stubborn, but even I recognized that God was telling us it was time,” says Wesley.

That’s when the Browns got connected with Fr. Chris Findley at St. Patrick’s in Murfreesboro.
“Fr. Ray [Kasch] and I were impressed with their maturity, thoughtfulness, and commitment to the planting process. As Fr. Ray and I both have served as Church Planters, we sensed God’s timing and work in bringing this team together,” says Fr. Chris.

They began gathering a core group of interested people last August, a number of which were confirmed at the last Bishop’s visit to St. Patrick’s. The group has grown from a Wednesday night Anglican 101 class into full Sunday Holy Communion and Evening Prayer services. St. Patrick’s will help St. Brigid’s learn the liturgical tradition over the next several months, hoping to formally launch later this year.

“What most excites me is seeing the light bulb moment when someone who has been on a spiritual journey first experiences the richness of the liturgy,” says Wesley. “The reverence of the Sacraments, the beauty of worship that is focused on giving versus receiving… This is what their heart has been longing for the entire time.”

“I love the sense of community the Anglican Church encourages,” says Shari, “and I’m excited about living life together, serving together, and connecting with each other more than once a week and really being a family.”