Celebrating 25 Years of Work Across the World: Anglican Frontier Missions

With its silver anniversary, Anglican Frontier Missions has published a new book with compelling stories of its work, and is urging the Church that there is still much work to be done.

“AFM’s vision remains unchanged from our founding days: to mobilize the church to pray for and send missionaries to the largest and least-evangelized people groups and geographical regions,” writes Fr. Chris Royer, Executive Director of AFM, in the organization’s new book Shadows from Light Unapproachable. 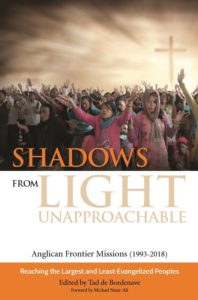 The book, written and edited by AFM founder Rev. Tad de Bordenave, traces the origins, people, and continuing foundations of AFM: stories of ordinary people called to ministry in far-flung areas of the world, missionaries recounting their challenges and efforts to persevere in about a dozen countries and ethnic groups, and deep insights into the major religious forces of today.

Fr. Chris’ favorite story of AFM’s work over the years is the service of the Beale family with the Tamang people group in Nepal, where their 30 years of work has resulted in a network of 82 Anglican churches with 9,000 believers. (Read more in the Spring issue of The Apostle.) More recently, Fr. Chris is “thrilled” that AFM has an increasing number of missionaries in areas of the world with little to no Christian presence – commonly known as the 10/40 window. 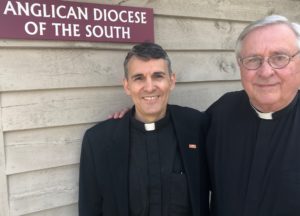 “The ‘those days’ Joel mentions are today in the Muslim world, an unparalleled outpouring of the Spirit of God upon Muslims in the form of dreams and visions,” says Fr. Chris. “This is coupled with unprecedented access to Scripture through the Internet since the new millennium.”

Nonetheless, Fr. Chris says the people of God are indispensable in planting churches where none exist.

“God has chosen to win and disciple new souls through his people, through putting sandals on the ground, and thus we have an enormous need for individuals willing to go and serve among Muslims,” he says.

As an example, Fr. Chris shares a story of how God is moving, from a worker in a war-torn Middle Eastern country:

After 3.5 years in the Middle East, Yakoob (name changed) is the first personal acquaintance I have led to Christ. As much as I had shared the Gospel and as much as Yakoob had been reading and discussing the Bible with me, he was nonetheless fearful and could not clear that cultural hurdle – even after having two dreams in which Jesus appeared to him. After months on the precipice of faith, he had finally made the decision to entrust his life to Jesus.

It is the Lord who saves, and from the outset we answered God’s call to ministry with the understanding that we may not see results in our lifetime. What a blessing and privilege it is to now disciple Yakoob and help him grow in his faith.

In addition to people willing to go and serve across the world, Fr. Chris says AFM’s greatest need from those in ADOTS and the ACNA is prayer.

And don’t forget to purchase a copy of their new book Shadows from Light Unapproachable, available here on Amazon and for Kindle.