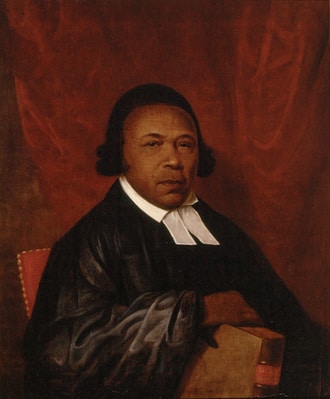 February is Black History Month, celebrating the contributions of African Americans to our society.

ADOTS leader and member Ty Bragg will be a part of the March to Freedom concert on Sunday, February 12th. March to Freedom: Songs of Sorrow, Justice & Hope is a concert by the renowned Trey Clegg Singers. The Trey Clegg Singers are a Semi Professional, Multicultural Choir that hail from various Atlanta Church Choirs, the Spelman College Glee Club, and the Atlanta Symphony Orchestra Chorus. All are invited.

On February 13th, we observe the commemoration of Absalom Jones. James Kiefer, who writes commemorations for the Anglican daily office, has provided us with an excellent overview of his life:

In 1786 the membership of St. George’s Methodist Episcopal Church in Philadelphia included both blacks and whites. However, the white members met that year and decided that thereafter black members should sit only in the balcony. Two black Sunday worshippers, Absalom Jones (1746-1818) and Richard Allen (1760-1831), whose enthusiasm for the Methodist Church had brought many blacks into the congregation, learned of the decision only when, on the following Sunday, ushers tapped them on the shoulder during the opening prayers, and demanded that they move to the balcony without waiting for the end of the prayer. They walked out, followed by the other black members.

Absalom Jones conferred with William White, Episcopal Bishop of Philadelphia, who agreed to accept the group as an Episcopal parish. Jones would serve as lay reader, and, after a period of study, would be ordained and serve as rector. Allen wanted the group to remain Methodist, and in 1793 he left to form a Methodist congregation. In 1816 he left the Methodists to form a new denomination, the African Methodist Episcopal Church (Ame). Jones (ordained deacon and priest in 1795 and 1802) and Allen (ordained deacon and elder in 1799 and 1816) were the first two black Americans to receive formal ordination in any denomination.

Set us free, O heavenly Father, from every bond of prejudice And fear: that, honoring the steadfast courage of thy servants Absalom Jones and Richard Allen, we may show forth in our lives the reconciling love and true freedom of the children of God, which thou hast given us in our Saviour Jesus Christ, who liveth and reigneth with thee and the Holy Spirit, one God, now and for ever.

Set us free, heavenly Father, from every bond of prejudice and Fear: that, honoring the steadfast courage of your servants Absalom Jones and Richard Allen, we may show forth in our lives the reconciling love and true freedom of the children of God, which you have given us in our Saviour Jesus Christ, who lives and reigns with you and the Holy Spirit, one God, now and for ever.

← My Reflection on the Summit for Life and March for Life: Fr. Laird Bryson
Beeson Offering Post-M.Div. Anglican Studies →