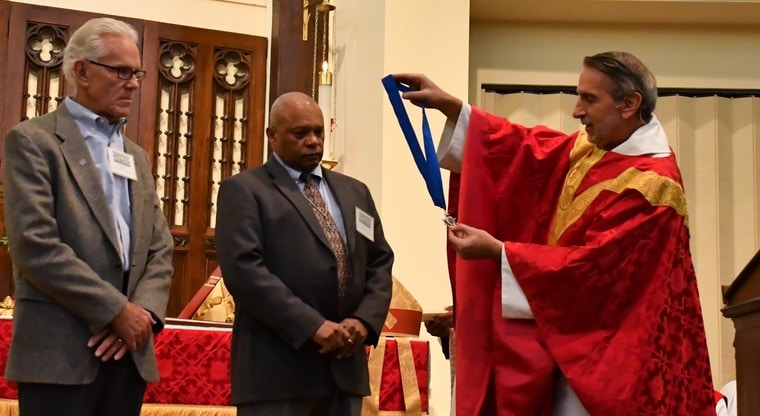 “From the time I first made a heart commitment to embrace my new life in Jesus Christ I have been called to a prayer life,” says Mr. Ty Bragg, Prayer Coordinator for the Diocese of the South.

Archbishop Foley Beach created a new tradition at the 2019 Mission Matters Conference & Synod: the institution of the Bishop’s Cross Award for outstanding service to the Diocese. The inaugural recipients of this honor are Mr. Ty Bragg and Mr. Chuck Lewis (to be featured in a separate article).

“As a child, my Great Aunt Ida saw that I attended church. She repeatedly told me that the Lord would use me and one day I would lay hands on the sick and see them healed,” says Bragg. “That thought never escaped me even when I was far from [being] a saint. I have had an ever-increasing call to prayer and intercession. The abiding presence of Almighty God has ever drawn me to Him.”

Mr. Bragg’s ministry within the Anglican Church began 15 years ago in Peachtree City, GA, where he was Minister of Music and Worship at Prince of Peace under Fr. Ray Greiner. “It was a very warm, reverent, and praying parish,” says Bragg. “Many hours of intimate prayer and healing were had during our Thursday evening prayer gatherings.” It was also there that he met his wife, Joey Jordan Bragg.

Then in 2011, he became Minister of Music and Worship at Trinity Anglican in Douglasville, GA. Beginning in 2012, Bragg served as Secretary on the ADOTS Standing Committee, to which he was reelected in 2018. During his current term, he has served on the Nominating Committee, the Ecclesiastical Court, and the Cathedral Dean Search Committee.

“As my first Standing Committee term came to an end, Bishop Foley asked me if I would prayerfully consider coordinating prayer for the diocese. I was surprised at both the request and nod I received from the Lord,” says Bragg. This led to the first Prayer Conference for the diocese in 2014, a second conference in 2017 focused on healing prayer, and coordination of prayer leaders and ministers around the diocese.

“As prayer is learned by doing, I have experienced tremendous personal victories and monumental defeats during my spiritual journey,” says Bragg. “As I trust in the Lord with all my heart I experience victory. However, distractions can cause any of us to easily ignore the promptings of the Holy Spirit. We must be vigilant to keep our hearts toward our Master.”

Bragg also currently mentors prison inmates, several of whom he says will spend the rest of their days in state prison. “During my walk with the Lord, He has employed my gifts, allowing me to travel as His ambassador to many nations experiencing many opportunities to guide people into relationship with the Lord to experience the beauty of His salvation,” he says. “I have been and am being used of the Lord. It is a wonderful thing to hear a born-again convict say, ‘It has taken prison and incarceration to set me free.’”

Bragg’s favorite story of prayer ministry goes back to 1976, when he returned home from Europe. He had been playing the role of Judas in a touring production of the rock opera Jesus Christ Superstar – at the end of which he made a deeper commitment to his walk with the Lord. He received teaching and discipling from missionaries in Holland, and continued traveling through Europe and the Middle East with missionaries, using his gift for music as ministry. But upon his return home, he found his mother gravely ill.

“Her bones were so brittle that her legs were broken, and she was unable to walk. Doctors had told her she may never walk again. I told her I was going to anoint her, pray for her healing, and for her to do some spiritual business with Jesus Christ,” says Bragg. “I did and she was healed, walked, sometimes faster than she might should have, and did business with the Lord before she went to be with him ten years later.”

He also was able to be reconciled with his father and pray over him before his death. “Those prayer times are my best and favorite memories,” he says. “Closely following are times I prayed for my children to receive the Lord.”

Bragg was scheduled to hold a prayer workshop at this year’s Synod, but he and his wife both became quite ill with colds. He called the Cathedral office to say he would be unable to attend.

“I immediately received a response that Archbishop Foley said that he needed me there. Well, I mustered myself and made the hour and a half drive hoping not to infect others. To my deep surprise, I was awarded the Bishop’s Cross. Yes, I was surprised and highly honored. I cherish the recognition because I know it is a result of God’s faithfulness as I yield to Him.”

Mr. Bragg gives a beautiful and powerful description of the ministry of prayer:

“Victory is ours to be had for the Kingdom of God is here, now. Each day is new. Each day presents an opportunity for entering the throne room of our Lord Jesus Christ, intimacy with our Heavenly Father, and Holy Spirit-guided divine appointments.”